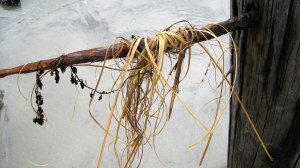 “68Blessed be the Lord God of Israel; for He hath visited and redeemed His people,

69And hath raised up an horn of salvation for us in the house of His servant David;

70As He spake by the mouth of His holy prophets, which have been since the world began.”

God has been speaking to mankind “since the world began.” Initially God spoke to us face to face with no need for messenger or mediator. Then the serpent deceived the woman and the woman talked the man into going along — a sad picture of the fallen-from-grace. God cast them out and barred the way back. At the same time — even before that time — God formulates His plan. He will “raise up an horn of salvation for us in the house of His servant David” and He will “speak [to us] by the mouth of His holy prophets, which had been since the world began.”

Never did God give up on us. Even as He closed the gates to Eden, He planned to open them. Even as He turned His face from us, He planned a means to His desired end to have us see Him face to face once again. He planned His visit to earth in the form of a human infant, at which time He would fully engage Himself in being human so that He might save His people from our sins.