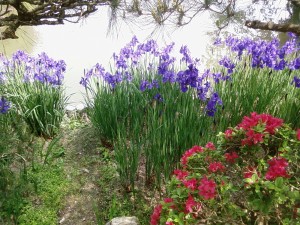 “[Christ] enters once for all into the holy places, not by means of the blood of goats and calves but by means of His own blood, thus securing an eternal redemption.” The blood of goats and calves secure only a temporary redemption, one that requires repeating and repeating, year after year. “Under the law almost everything is purified with blood, and without the shedding of blood there is no forgiveness of sins.” (Hebrews 9:22)

“Christ has entered, not into holy places made with hands, which are copies of the true things, but into heaven itself, now to appear in the presence of God on our behalf. Nor was it to offer Himself repeatedly.” (Hebrews 9:24-25) Instead, He “appeared once for all at the end of the ages to put away sin by the sacrifice of Himself.” (Hebrews 9:26)

“Christ, having been offered once to bear the sins of many, will appear a second time, not to deal with sin but to save those who are eagerly waiting for Him.” (Hebrews 9:28)

Notice when Christ returns, He is not coming back to deal with sin, for He has already finished dealing with sin. Instead, when He comes again, He is returning to save. His sacrifice for us is once for all, and need not be repeated.